My client contacted me regarding their quarry tiled floor which hadn’t been in a good condition for some time. A recent flood in the house, caused by a ruptured pipe in an upstairs boiler had only added to the problem. As you can see from the before pictures, the floor was in a sorry state. On the plus side the flood had led to an insurance claim which would cover the cost of the restoration.

I visited the property and did a test clean on a section of Quarry tiles which came up well. The client was happy the result and agreed to go ahead, my quote was agreed, and the job booked in. The property was in Bearwood which is in the southern part of the Birmingham suburb of Smethwick. 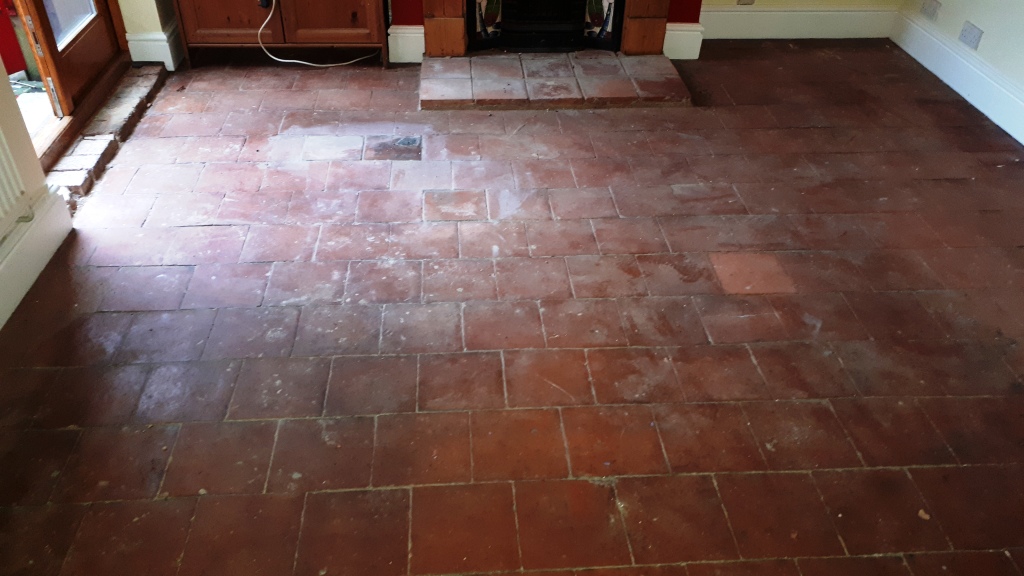 I was able to get the replacements delivered in time for the job starting which was just as well as my first task would be to repair the floor. Fitting the replacements was tricky work as some of the tiles were up to two inches thick and came in various sizes and so had to be cut to size with a wet tile cutter. The tiles were a good match though and they were set in place. Later that day I was able to grout them in using a matching grout along with some other areas that needed re-grouting. By the end of the first day the floor was already looking much improved.

The next day the floor was cleaned with a strong solution of Tile Doctor Pro-Clean. The solution is left on the tiles to dwell for about ten minutes so it can start to soak into the deep-seated dirt and break it down. The tiles were then scrubbed with a black pad fitted to a weighted rotary machine. The grout was also cleaned at this point using more Pro-Clean and a hand-help scrubbing brush.

There was also a fireplace hearth that needed cleaned, this also had to be cleaned by hand as the machine was too large. The floor was then rinsed with water and the resultant slurry extracted with a wet vacuum. 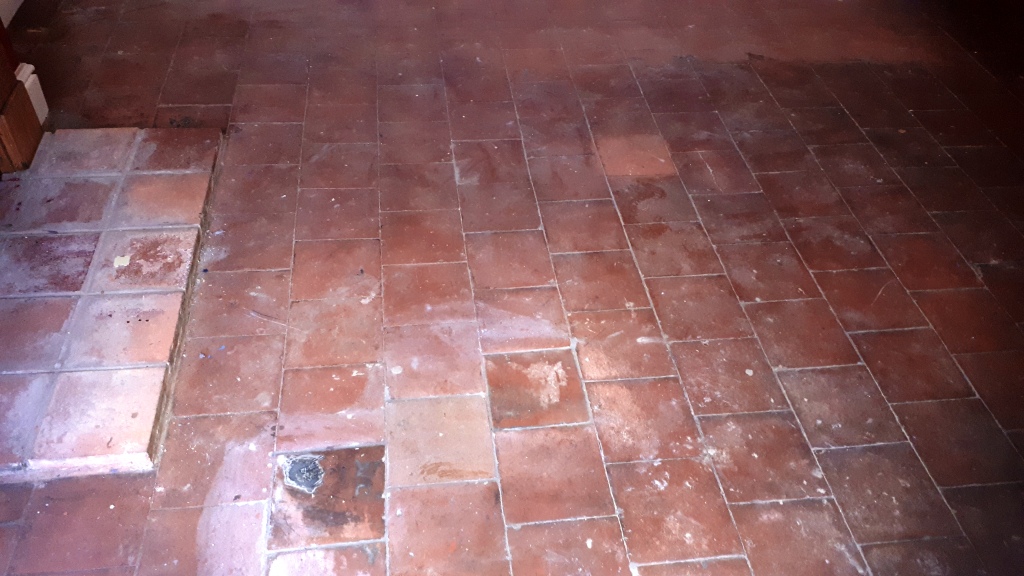 The last part of the cleaning process was to give the tiles and acid-wash using a dilution of Tile Doctor Grout Clean-Up. This is an acidic product that can remove mineral staining and will also counter any alkaline salt deposits in the pores of the tile that could surface as the floor dries later. The floor was rinsed again and allowed to dry out for two days before I returned.

On the final day I first confirmed the Quarry tiles had dried out were ready for sealing. I then sealed the tiles using Tile Doctor Colour Grow which is a fully breathable sealer that would protect whilst allowing moisture in the floor to rise through the tile. This sealer will also enhance the strong natural colour of the quarry tiles. The tiles were quite porous so four coats of sealer were needed, then after drying the floor was buffed with a white pad. 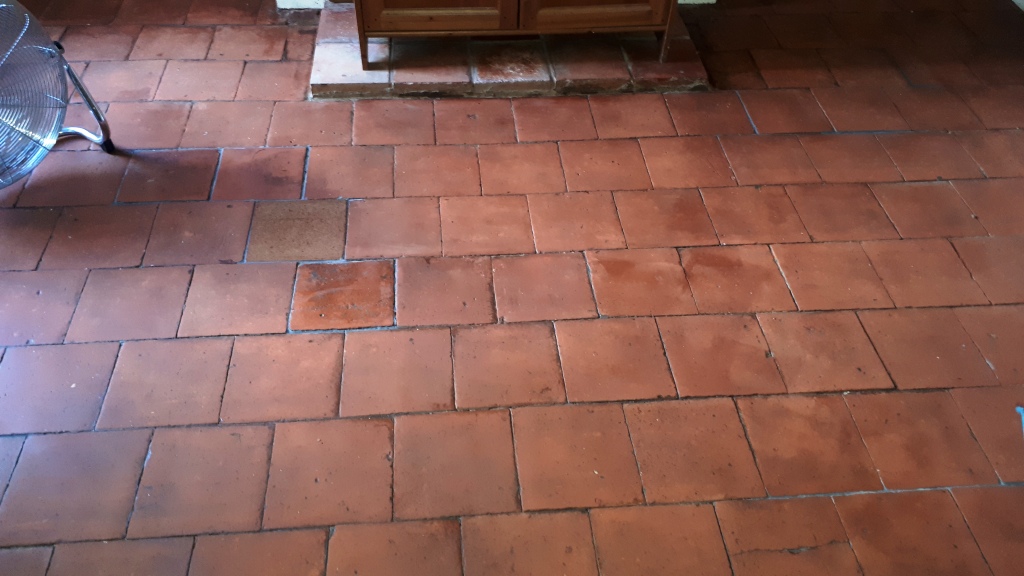 The work transformed the floor and my customer was over the moon with the end result. 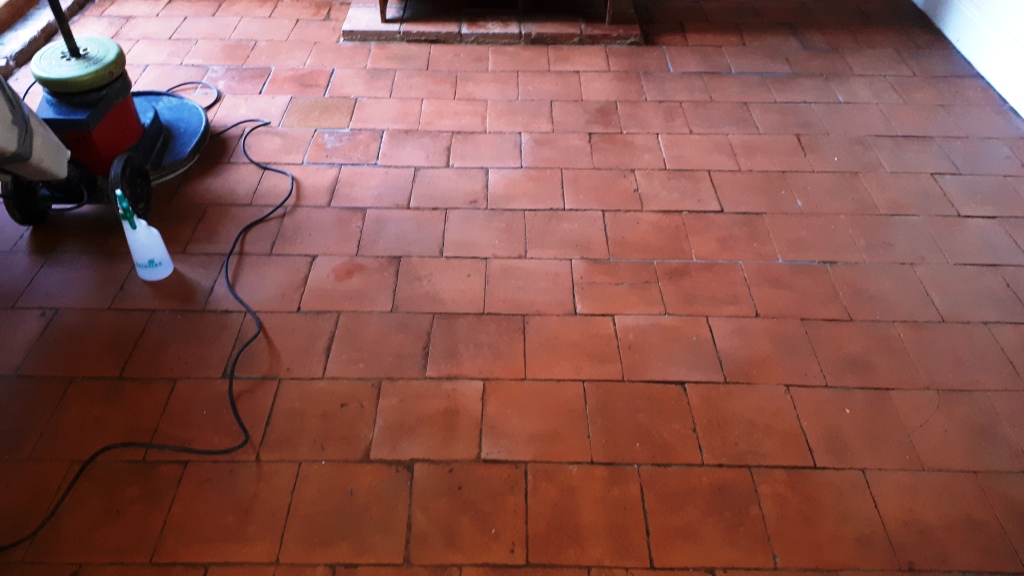 For after-care I left the customer with a complimentary bottle of Tile Doctor Neutral Tile Cleaner. This is a pH neutral product that is safe to use on sealed surfaces and won’t prematurely erode the sealer.

Professional Restoration of a Quarry Tiled Floor in Birmingham

I was recently contacted by a home owner who had recently bought a property in Rednal which is a residential suburb on the south western edge of Birmingham near Bromsgrove. They were updating the flooring and discovered a quarry tiled floor under their living room carpet. The Quarry tiles were most likely original dating back 113 years and the owner was keen to have such an original feature restored. 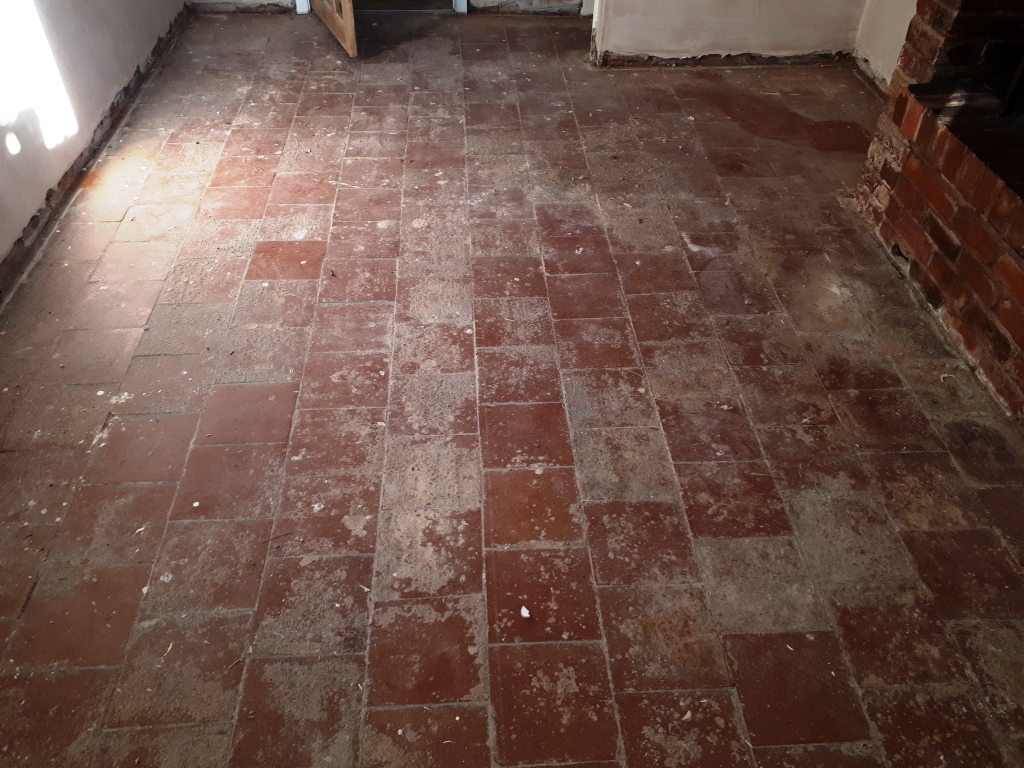 The Quarry tiles were well worn in areas and it looked as though a previous owner had levelled the floor using a cement screed to try and fill in any worn areas. Unfortunately, this had left the tiles with a rough surface and were very dirty as the photos show. 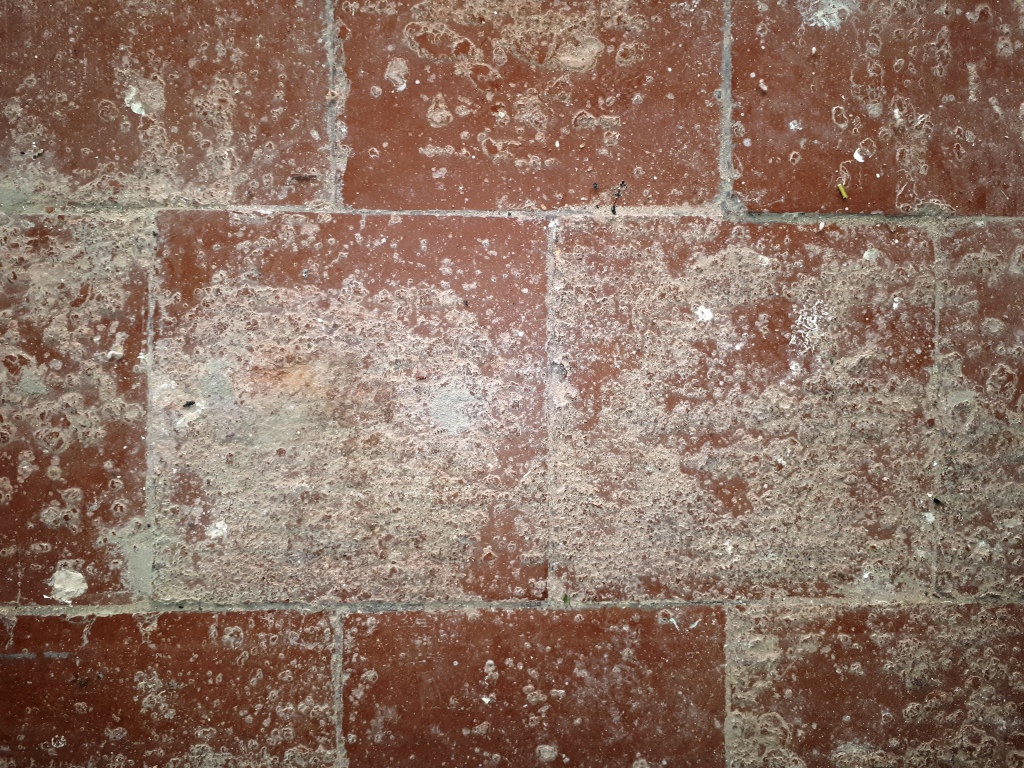 My first task was to remove any loose dirt and debris with a wet dry vacuum. Once done I then applied a strong dilution of Tile Doctor Pro-Clean to give the tiles an initial clean to remove dirt from the tiles. The solution was left to soak into the tile for around ten minutes and then worked into the floor using a rotary machine fitted with a black scrubbing pad. 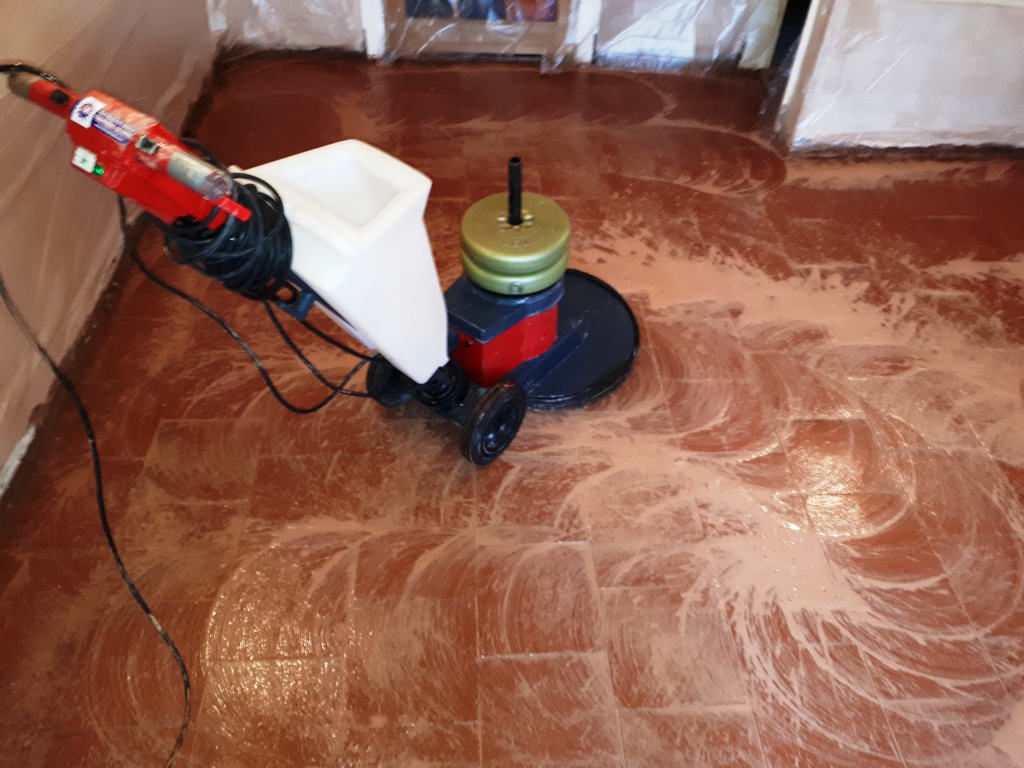 This process highlighted the roughness of the tiles from the cement as the pad was being torn by it. I decided that the best way to remove the cement was to scrape it away aided with a steamer. This meant a few hours on my hands and knees scraping away which was hard work but needs must! 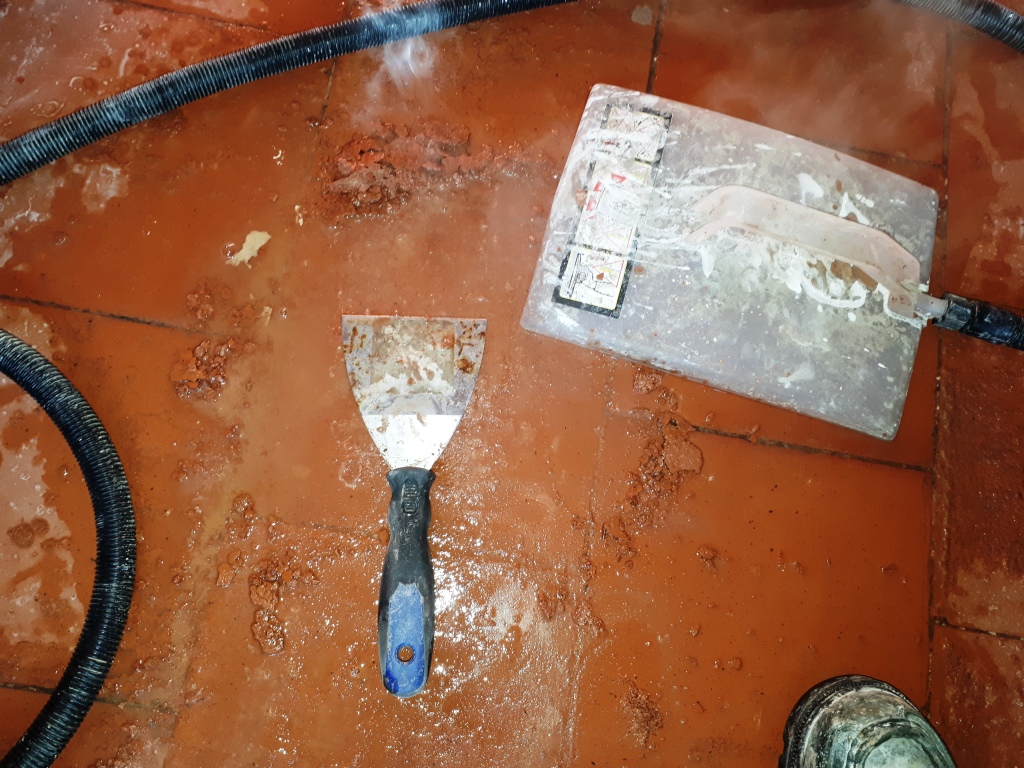 When this was completed I used hand held diamond blocks to remove paint marks and adhesive from where the skirting board had been. I then cleaned the floor again with more Pro-Clean and a new black pad, I also cleaned the grout lines with a stiff grout brush. The floor was then thoroughly rinsed off with water to remove any dirt and solutions and this was then extracted using a wet vacuum.

With the floor now clean I could see there were signs of efflorescence markings on the floor which is where salts are carried up through the floor through evaporation. These old floors don’t have a damp proof membrane in place to prevent damp issues so to neutralise the salts I applied Tile Doctor Acid Gel to the floor. This was left in place for a short time before rinsing the floor again. The floor was then allowed to dry out for a couple of days.

Upon my return I checked the floor for damp with a meter which gave satisfactory readings. The floor was then sealed with two coats of Tile Doctor Colour Grow which is an impregnating colour enhancing sealer that really brought out the red colour of the quarry tiles. 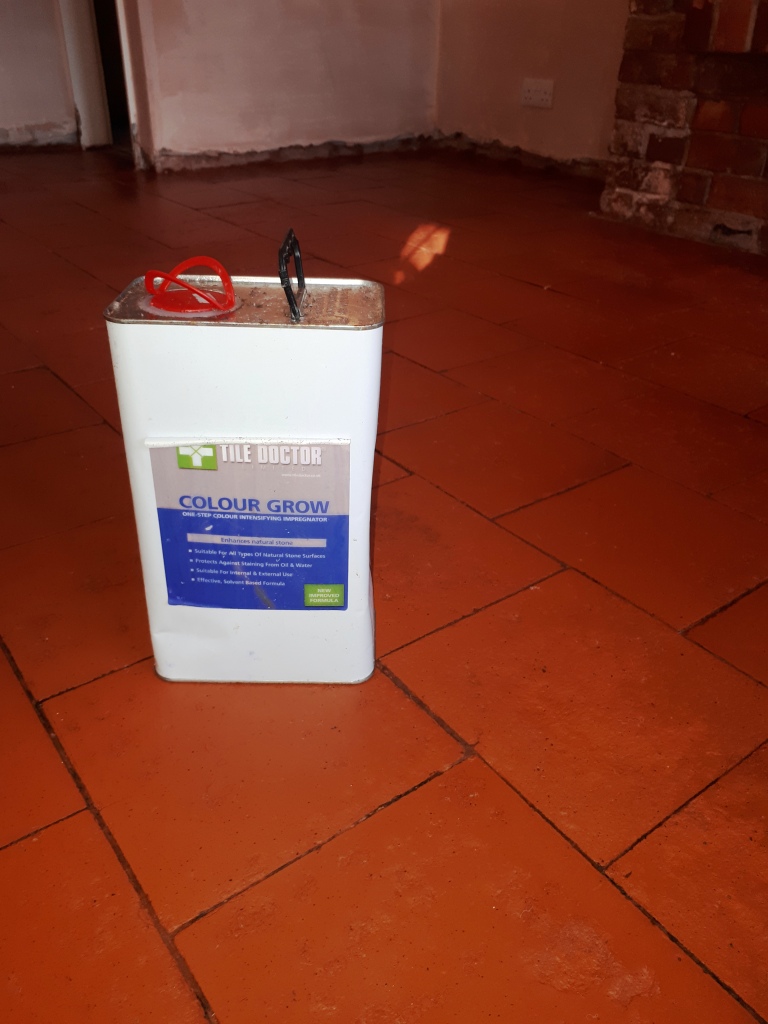 One the sealer had dried the floor was then buffed off with a white pad to remove any excess. As you can see the floor was transformed. I left the customer with a bottle of neutral tile cleaner to help maintain the floor.” 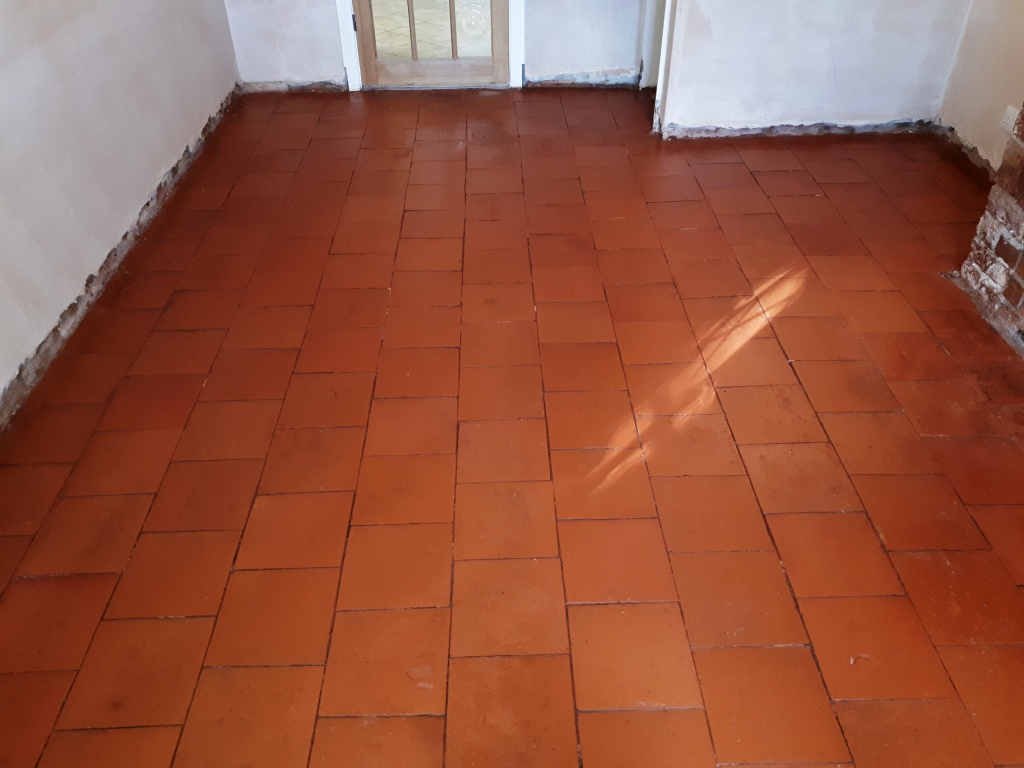 Restoration of an Original Quarry Tiled Floor in the West Midlands